So this past week I have been working on building a rotational casting machine. It’s been a big project. I found the “instructions” on the Thingiverse website. Based on the few pictures it had it looked to be exactly what I needed. It was a combination of 3D printed parts, wood 2x4s, and some store bought items. “Great.” I thought. “This should be easy.” WRONG!

I wrote down what parts I needed to print, but when I went in to look at the .stl files there were about 50 listed when I only needed seven. So the first task was to sort through all the files and find only the seven that I needed.

The instructions for the best way to print this was pretty vague as well.

There was more problems with this, but I will go into that later.

The next step was cutting wood. Now, the person who posted this didn’t say how many 2x4s he used. He just says, “I have a lot of 2X4’s, PVC Pipe and 3D Printers.” Isn’t that helpful. So I cut down some 2x4s so that the sides are square. This took off about 1/4″ of material from them. Then I proceeded to cut the wood to the lengths specified.

Now this is where things get fun. There are no instructions. Ok. Well, that’s not exactly true.

Now, if you’re anything like me you need a little more than that. So I decided to go to the pictures. Yeah, those aren’t helpful either.

As you can see, you get on computer drawing, a video for a different model of machine, and a couple partial pictures that don’t really help at all, and all that is followed by about 50 different shots of the .stl files (most of which I don’t need).

So I lay out all my cut pieces of wood and start to do kind of a preliminary set up of how things may go together. I would also like to note that when I first started trying to do this the wood list did not have the explanations as to which length was which part. That seems to have popped up recently. It was helpful when I was putting together the frame though.

I started by drilling 1 1/8″ holes in the centers of each axis board to allow for the PVC pipe to fit through. I wasn’t exactly sure how things were going to go together in the end which is why I did all 8 boards. Really you don’t need two of them if you know how things fit together.

I spoke to my professor who recommended doing pilot holes and countersinks for where the screws go. That way you don’t really run the risk of splitting the wood when inserting the screws. I did a pilot hole with a drill bit that was about the same diameter as the shaft of the screw. The countersinks were done with a drill bit that was slightly larger than the head of the screw. I recommend using a drill press for this. It will insure that your holes are straight. As you can see in the picture below my holes are not the best because I did it with a power drill. 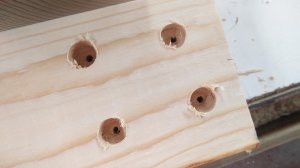 Once I had all the holes drilled I was ready for basic assembly. Once I screwed everything together I placed the PVC pipes (3 at 7″ and 1 at 9″) in with the 3D printed parts just to kinda see how things went together.

I did a similar process with the frame as I did with the axis. I set it up to see how it went together and the drilled all the pilot holes and countersink holes I would need. I used some wood glue on the parts where the 14.24″ pieces fit to the frame, and where the vertical supports also attached prior to gluing them together. I did have to shorten the 32″ boards to 31.75″ because the after squaring the boards they were a little too long. I clamped things down, screwed them together, and let them sit for a few hours while the glue set.

I came back the next day and kind of pieced it together to make sure things fit and it spun well.

All I need now was to go to a hardware store and get screws to attach the different printed pieces to the wood and zip ties for when I attach the belt.

This has been far more work than I anticipated. Having instructions would have helped immensely to save time and frustration. But I seem to have been able to figure it out eventually.

I am going to post better instructions to instructables and thingiverse. It’ll be a great machine when it’s done, but assembly is NOT self explanatory.

I also want to build a second one that is half the size. I am just trying to figure out how the printed parts would work. I am probably going to have to completely redraw all of them.

Time spent on this so far

Printing the pieces = about 30 hours

– reprinting some pieces = another 20+ hours

putting everything together = 4 hours (so far)

This site uses Akismet to reduce spam. Learn how your comment data is processed.